The concept of manipulating facial muscles during facelift surgery for improved results first came about in the 1970s. This technique addresses the superficial muscular aponeurotic system (SMAS). The SMAS layer is tightened and some ligaments are released to facilitate this process. Since then, the SMAS facelift has become the standard facelift technique. However, the SMAS evolved into a procedure known as a deep plane facelift which is quickly becoming a favored technique among surgeons and patients. Dr. Santos and Dr. Jonov at Seattle Plastic Surgery provide the best deep plane facelift Seattle and Tacoma offers.

The difference between a deep plane and SMAS facelift comes down to surgical technique. During both procedures, the surgeon cuts into the muscle and lifts it to tighten it. In some cases, a small portion may be removed. The varying technique comes in during the lifting portion. During a SMAS facelift, the surgeon lifts the muscle and skin separately from one another. However, during a deep plane facelift, the skin and muscles are lifted together. Many believe it creates a more natural look.

Otherwise, a deep plane facelift closely resembles a traditional facelift. The incisions, removal of extra skin, and release of the ligaments all occur in almost the same manner. The small variation in surgical technique may also help reduce trauma to the skin and lead to few side effects since the skin and muscle are not separated.

Major complications associated with a deep plane facelift are rare. The surgery is largely considered low risk in healthy, non-smoking patients. Additionally, when complications do occur, they tend to be treatable and less severe. Certain medical conditions, medications, and smoking can make you more susceptible to complications. Therefore, make sure to provide your plastic surgeon with your entire medical history. 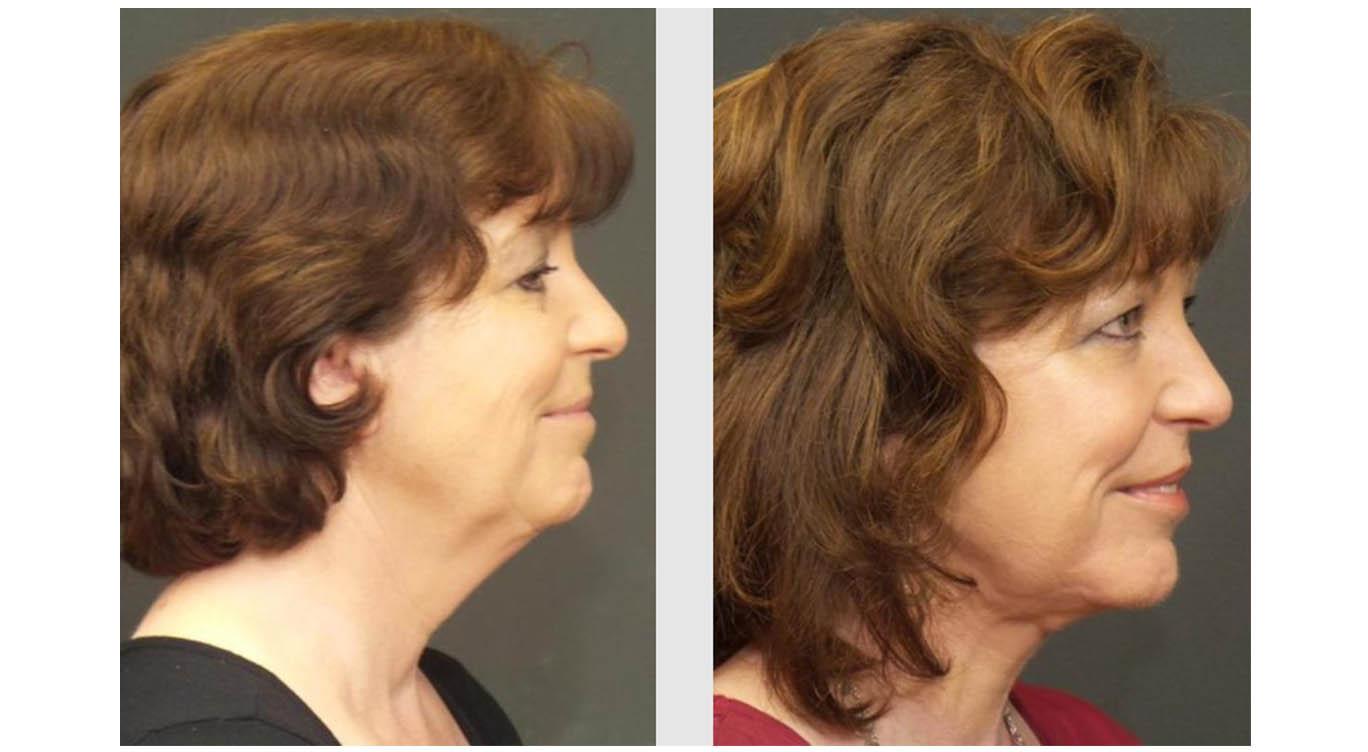 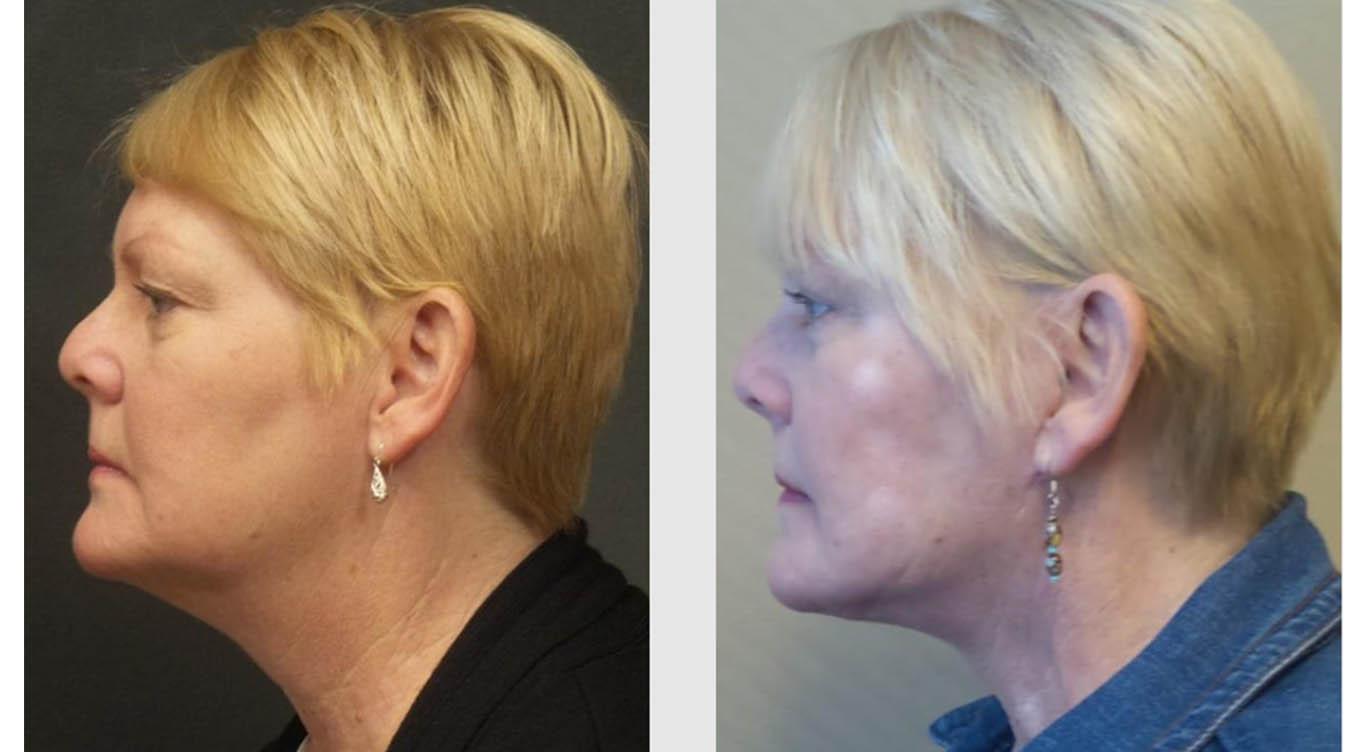 Before & After Deep Plane Facelift Surgery

At a consultation appointment with Dr. Santos or Dr. Jonov at Seattle Plastic Surgery, you will first discuss your goals and specific concerns. They may then ask about your medical history and if you smoke. From there, they will perform a physical examination. This helps them identify the amount of extra skin present, skin quality, and what is necessary to achieve the results you want.

If your Seattle plastic surgeon believes that a deep plane facelift is the right way to proceed, they will describe the procedure and expected results. If they do not believe you are a candidate, your plastic surgeon may suggest other possible procedures. Before you leave the Seattle Plastic Surgery office, you will receive a personalized price quote for your surgery and financing information.

A deep plane facelift in Seattle may be performed under local or general anesthesia. Regardless, you should remain perfectly comfortable. Once properly anesthetized, your Seattle plastic surgeon will begin by making the incision just in front of the ear and follow it behind the ear.

Through this incision, your plastic surgeon will release the necessary ligament before pulling the muscle and skin tighter. Depending on your needs, they may also reposition descended fat pads or tissues. Finally, your surgeon will tighten the skin and muscle together, removing the excess skin and potentially a small portion of the muscle. They will repeat the process on the other side and stitch the incisions.

Patients can expect to take at least a week off work. Most return to work and most social activities in around ten days. Patients can return to several exercise activities in two weeks, but certain ones such as lifting or especially strenuous exercise may need to be limited for six to eight weeks.

Does A Deep Plane Facelift Fix A Double Chin?

The answer to this question largely depends on the patient’s anatomy and the cause of a double chin. Occasionally, a person experiencing lower face sagging will develop an extra chin. In this case, the deep plane facelift will likely correct a double chin. However, for patients who have a double chin due to genetics or stubborn fat, a facelift is usually not the ideal procedure. Chin liposuction or Kybella injections are often the recommended treatment.

Can Releasing Ligaments Have Negative Effects?

The term “releasing ligaments” may sound harsh and some patients question if it could have negative effects in the future. The good news is that since only the SMAS is addressed, the ligaments released are superficial and often contribute to the signs of aging. Since the ligaments are only released superficially, this poses little risk to compromising the facial features or worsening existing health problems.

Will It Correct The Neck Too?

It can, though patients will often need to undergo a platysmaplasty and/or neck lift at the same time as their deep plane facelift to get the best possible neck rejuvenation. Those with only mild neck aging may see enough correction from the facelift alone.

Similarly, while a deep plane facelift often will correct up into the midface, it will not address the under eyes. Thus, if the midface or eyes are also a concern for you, then adding a blepharoplasty surgery or midface lift may help you reach your goals.

Is 45 Too Young For A Deep Plane Facelift?

Not necessarily, though, it is on the younger side of the average age of deep plane facelift patients. Some patients—particularly those who smoked for several years or have extensive sun damage—due tend to age quicker than others. These patients may benefit from a deep plane facelift in their forties. This subset of patients is also more likely to need another facelift at some point in their lifetime.

Overall, the average age to undergo a deep plane facelift surgery is somewhere in your fifties or sixties. Though patients well into their seventies can sometimes benefit from facelift surgery.

How Much Is A Deep Plane Facelift?

The exact cost of a deep plane facelift will ultimately depend on the extent of the surgery. Also, surgery under local anesthesia usually comes at a lower cost than surgery under general anesthesia. While you receive a customized price quote following a consultation, facelift surgery starts at around $7,995 with local anesthesia. Deep plane facelifts though tend to cost more than the average facelift due to the specialized technique necessary. It is also considered one of the more extensive facelift options.

Seattle Plastic Surgery does work with outside finance companies including Care Credit to offer affordable financing for your procedure. Visit our financing page to learn more and find links to apply.

Dr. Santos is amazing! He does incredible work and takes the time to go over everything with you to ensure that you are 100% comfortable with the game plan for your procedure. I highly recommend Dr. Santos and his team.

Great experience with Dr. Jonov. Great surgeon, did a phenomenal job. I especially appreciated how upfront and honest he was about what procedures would be best for me and what would be a waste of time/money. Even after the surgery was over, he seemed to truly care about my progress and satisfaction with the procedure at every follow up visit. I have recommended him and the whole plastic surgery center to numerous friends and family members.

Look no further for plastic surgery or injections! I cannot recommend this place and their providers enough. The entire staff are always very helpful, friendly, and professional. The office is setup beautifully and is very welcoming.

Dr. J and his staff were AMAZEBALLS! I came in for a Swiftlift. They were kind , calm, and reassuring throughout the entire process. I look crazy amazing!.... way better than I thought possible. After the past two years I have had, I have myself back again. I love coming for my check ups for the laughter and kindness. Dr. J is honest about what to expect and will keep you positive and realistic. This was one of the best decisions I ever made. If you are on the fence, jump off. You won’t regret it! I promise!

The Leading Destination For Deep Plane Facelift Surgery In Seattle

Drs. David Santos and Craig Jonov are two plastic surgeons well-versed in all types of facelift surgery. With over fifty years of combined experience and tens of thousands of facelifts combined, they are among the best facelift surgeons in Seattle. Dr. Santos focuses specifically on facial plastic surgery and Dr. Jonov also performs several other types of plastic surgery including of the breast and body. With this wealth of knowledge and expertise, Seattle Plastic Surgery provides the best deep plane facelift Seattle and Tacoma offer.

To learn more and to schedule a consultation, call us at 206-324-1120. You can also reach out online via Price Simulator, chat, or contact form.